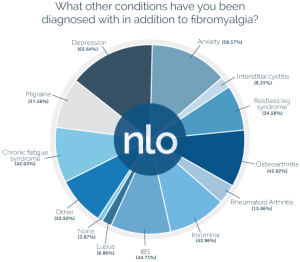 Licensed professional counselor Eric Patterson says the relationship between fibromyalgia and mental health conditions like depression and anxiety is reciprocal.

“The presence of one makes the other worse,” he told NewLifeOutlook.

This connection between physical and mental health is something people living with the condition understand all too well.

“I get depressed because I am not the person I was before,” one survey respondent said. “I felt stronger then, and now I feel so weak.”

Another said: “The simplest things for others are difficult for me. If I push myself to finish things I am down for the next few days. I am a strong woman and I hate this feeling.”

Doubts over the legitimacy of fibromyalgia as a medical condition take a psychological toll, too.

“It’s hard to deal with an illness when the people around you don’t understand what you go through on a daily basis,” one person surveyed said. “This adds to your pain, anxiety and depression.”

“I have dealt with doctors, friends and family members that don’t even bother to hide their doubts, and even dismiss my symptoms and daily struggles,” commented another. 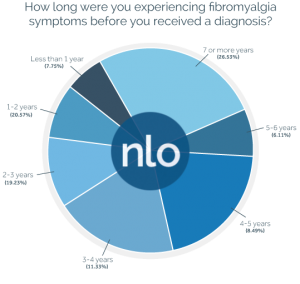 These doubts from friends, family and physicians may also contribute to the length of time it takes for fibromyalgia patients to receive a diagnosis. Nearly 30 percent of those surveyed said they experienced symptoms for five or more years before receiving a diagnosis.

Just under eight percent had received their diagnosis within a year of their symptoms starting. About 40 percent received a diagnosis in between one and three years, while around 20 percent waited between three and five years.

Increased awareness and understanding of fibromyalgia and its symptoms could go a long way to decreasing this timeframe, and may also help to improve patients’ mental health.

In the meantime, Patterson recommends that fibromyalgia sufferers struggling with depression and anxiety focus on eating well, getting gentle exercise, and making sleep a priority — things that will help physical symptoms of fibromyalgia and improve mental health — as well as talking to a therapist.

NewLifeOutlook conducted the survey hoping to better understand its fibromyalgia community members, in order to provide them with a more valuable experience. Women over age 35 made up the vast majority of survey respondents.

NewLifeOutlook is a family of websites that focus on people living life with chronic illness — not on the illness itself. We strive to offer practical information to help people afflicted with chronic conditions better deal with everyday life post-diagnosis, and to connect with others who share their experiences.

*95 percent confidence level, plus or minus four percentage points.